Brazil has been attracting lots of attention from the international arbitration community. This has probably less to do with Brazil’s arbitration-friendly legislation and the pro-arbitration attitude of Brazilian judges, and more to do with the following facts:

1. - Brazil has been experiencing a significant economic growth during the last few years. Along with such growth there has been a significant increase in the number of international arbitrations involving Brazilian parties.

2. - Brazil has become a capital exporter. In 2006 alone, Brazilian capital outflows overseas have surpassed the inflows of foreign direct investment to Brazil. The total amount of Brazilian foreign direct investment abroad is now superior to $106 billion U.S. dollars (Múltis brasileiras crescem mais no exterior at O Globo, January 21, 2007, at 31). The more contracts Brazilian investors sign, the more arbitrations there will be in the future involving Brazilian parties.

Update on Odebrecht vs. Ecuador

International news agencies mention that Brazilian multinational Odebrecht has accepted the terms of Ecuador to resolve a dispute over the San Francisco hydroelectric plant (you can click here for related news in English).

According to globo.com, Odebrecht deposited approx. US$ 44 million today under the trust of a neutral third party. The amount deposited will be pending satisfaction of a third party independent analysis of the contingencies related to the breakdown of the San Francisco hydroelectric plant.

It's likely that the dispute does not qualify for investor-State arbitration, as Brazil has not entered in any BIT with Ecuador or signed the ICSID Convention. At the moment, there is no news available, as to whether there was an arbitration clause in the agreement signed by Odebrecht for the construction of the power plant.

In any case, it is not acceptable that Brazilian corporations continue to be unprotected by bilateral or multilateral investment treaties in their investments abroad.
Posted by Pedro Alberto Costa Braga de Oliveira at 9:21 PM 45 comments:

Brazilian Investment in Ecuador in trouble

In my posting dated May 04, 2007, I’ve mentioned that there was a strong reason for a review in Brazil’s long-standing aversion to investment-arbitration: the protection Brazilian nationals' investment abroad.

Well, there are clear examples of that taken from today’s international news.

Earlier today, President Rafael Correa of Ecuador ordered the Ecuador’s armed forces to seize assets of Brazilian multinational Odebrecht. The assets are estimated to be worth about $800 million US Dollars (link here).

I don’t know if either Odebrecht or Petrobras made their FDI in Ecuador through subsidiary companies (in a country allowing them to use an investment-arbitration scheme) or using Brazilian vehicles. Also, I don't know any further details of either case, and I'm not making any judgments here. My personal opinion is simply that both companies would be much better off arbitrating their disputes at ICSID or any other neutral arbitral tribunal than litigating against Ecuador in Ecuadorian courts.
Posted by Pedro Alberto Costa Braga de Oliveira at 7:45 PM 3 comments: 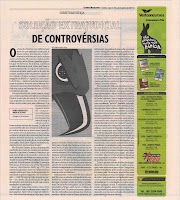 Brazilian newspaper Correio Braziliense, which has a specific law section available every Monday, published yesterday an article I wrote about ADR.

The articles makes a comparison between the U.S. approach to settle disputes out of court with the hesitant 2006 Brazilian court conciliation program.

You can click in the picture to have full access to the text, in Portuguese.
Posted by Pedro Alberto Costa Braga de Oliveira at 3:44 PM 1 comment:

Arbitration and the choice of the arbitral seat 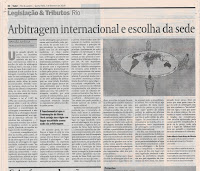 Brazilian newspaper Valor Economico published today an article I wrote about international arbitration and the choice of the arbitral seat.
You can click in the picture to have full access to the text, in Portuguese.
Posted by Pedro Alberto Costa Braga de Oliveira at 3:46 PM 6 comments:

In theory, arbitration clauses are valid for non-adhesive contracts on a consumer-relationship basis. I meant “theoretically” because the “Consumer Code" addresses consumer arbitration in different terms: it prohibits arbitration when imposed in standard contracts, where the consumer has little or no bargaining power at all. Some scholars argue that the Brazilian Arbitration Act has revoked this provision of the Consumer Code, while some others argue the other way around.

Arbitration is the preferred method of dispute resolution for foreign investors doing business in Brazil. Most foreign investors, however, prefer to select a foreign city —generally in the U.S. or Europe, as the case may be— as the seat of arbitration. They rarely select a Brazilian city as the seat (please read Seat in Brazil?). Foreign investors also prefer international institutions for administration of their arbitrations against Brazilian parties, such as the ICC, LCIA and the Triple A/ICDR. This is obvious as Brazilian arbitral institutions still lack the necessary ability to administering international disputes.

Some foreign investors doing business in Brazil through Brazilian subsidiaries (therefore, purely domestic transactions for purposes of Brazilian law) insist in inserting arbitral clauses providing for ICC arbitration. This is possible under ICC Rules of Arbitration. But while some believe that the party autonomy provided for Section 2 of the Brazilian Arbitration Act allows a party to a purely domestic transaction to elect any given law or lex mercatoria as the contract's governing law, the majority of scholars and arbitration practitioners believe otherwise.

Purely domestic disputes submitted to arbitration must (i) have Brazilian law as the governing law and (ii) establish a Brazilian city as the seat of arbitration. Foreign investors must avoid anything different than that in their arbitration clauses, unless the contract is —in fact— an international contract.
Posted by Pedro Alberto Costa Braga de Oliveira at 6:40 PM 1 comment:

Publicly traded companies participating in arbitrations... Do they have to disclose such participation to their investors?

Early this week Brazilian newspaper Valor Econômico published an article about disclosure of arbitration to investors by publicly traded companies.

According to the article, just a few companies traded at Bovespa have been disclosing information about arbitrations they are parties to. The article mentions three of such companies: Grupo Pão de Açúcar; Embratel; and Brasil Telecom.

Two things to keep in mind:

To date, neither a Brazilian court has ruled on this subject nor any fines have been imposed by CVM for lack of disclosure of participation in arbitration proceedings.

Attractiveness of a particular location as a potential seat of arbitration lies ―to a great extent― to the issue of whether there are, in such seat, a modern and arbitration-friendly legislation, supportive (pro-arbitration) courts, and a good general infrastructure.

Brazilian cities are hardly chosen as neutral seats of arbitration. I believe there are two main (and obvious) reasons for that:

(i) arbitral clauses are inserted in international contracts mainly because arbitration is seen as a "neutral forum" of dispute resolution. And, from a practical and financial standpoint, it may not necessarily make sense to establish the seat of an international arbitration in Brazil (if the parties are, for instance, from Europe, the US or Asia, the logistics involved may make it very expensive to arbitrate in Brazil).